What is Foot Printing ?| First Step Of A Hacker Before Hacking A System.

The full form of the DDOS attack is Distributed Denial Of Service Attack. If this attack is done on any website, that website will crash, that means it will be overloaded. In the beginning, the DDOS attack was not used for damaging websites, it was used for stress testing of websites.

Stress testing means checking the capability of a website that how much traffic it can take at one time. This method was used as an attack for the first time by the Anonymous hacktivists and they named it the DDOS attack.

In this attack, hackers flood the website resources with lots of spoofed IP addresses.

There is a limit of a server or of a website that how much traffic can come in a second, which is called the bandwidth of a website.

What does a user do when he comes to a website? receives data or sends data, and the websites have a limit to send or receive data. A hacker or attacker takes advantage of this limit. He sends fake users, that means fake IPs. Those users are called botnets which are just some programs, not a human being.

A hacker can not gain any profit by performing this attack. This attack is used to take revenge or to punish or to blackmail someone. 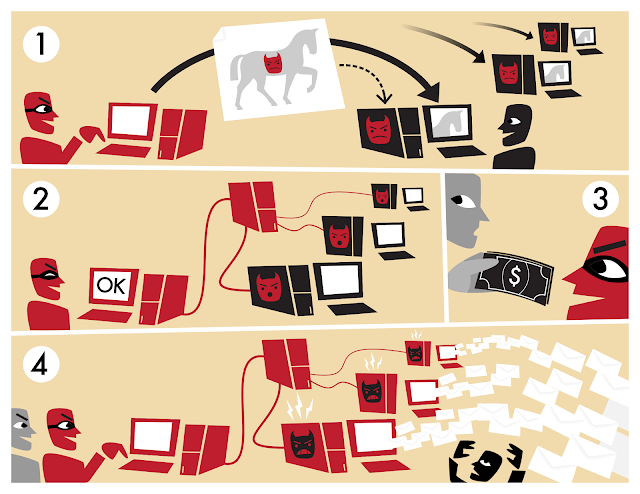 When you surf websites, have you ever noticed that many websites provide a chat room to chat with the administrator of the website for any help? The admin does not always chat with you by sitting in front of a computer.

The Admin provides a chatbot with frequently asked questions set in it to chat with you. This bot is called artificial intelligence which has its own brain. Facebook also has bots. When you make a Facebook page you might notice that Facebook provides you an option to set a bot in messenger platform which can reply messages automatically and instantly. These bots are made for helping people.

Now we are going to talk about Botnet. The word ‘Botnet’ comes from both ‘Robot’ and ‘Network’. A botnet is also called a zombie army, which means, a platoon of computer army that is infected in a way that they can damage anything.

Now, consider that we want to perform a DDOS attack on a website. Now, how can we gather so many users to perform the attack?

In this case, we will make a virus or a trojan attached to a bot that will work according to our command and we will distribute it through a song or any file to computers over the internet.

Now the computer users will distribute the bots attached with song or file unknowingly. In this way, we will make our own botnet army. Botnets are not for helping people, they are created for malware attacks.

Botnets contain malicious content. How to avoid botnets attack? Buy a good antivirus for your computer and keep up to date the antivirus`s virus definition.

If you want to practice the attack to learn how it works read our freshly prepared tutorial on how to perform a DDOS attack using Kali Linux.

DDOS attack always freaks out the website admins. Taking down a website resource easy for a hacker but not for the owner. It takes a very long time to rebuild the resources.
We shouldn’t perform these types of attacks without any reason, right?
What’s your opinion? let us know in the comment box.

What is Foot Printing ?| First Step Of A Hacker Before Hacking A System.

Hacking With SS7. Reality!! SS7 Flaw explanation and all about it.

What is Man In The Middle attack? : | Best Way To Hack Into a Network |