Cracker’s Advice: How To Access The Dark Web Securely.

Many people ask about bitcoin forks. Nowadays the forks keep coming. Mainly too many forks came in August(2017). You might know that if you have a bitcoin then you can get one bitcoin cash for free and these days bitcoin value keeps changes between 2,000$ to 3,000$. But many people didn’t get free bitcoin cash.

Maybe the website they were using does not support the free bitcoin cash. But there are many reasons. Maybe they don’t know that they can export the private keys to another wallet. Many people don’t know the key systems of bitcoin and other cryptocurrencies clearly. So, we’ll talk regarding it in this article.

Many of your concepts will be cleared. Basically, we’ll consider bitcoin as the main topic because people use this currency mainly these days. You all might know the public key and private key. They are reversal functions of each other.

We’ll not discuss it again. When you use a wallet, for example, the blockchain, zebpay or some other wallet, exactly what happen in a wallet, what is a wallet. Listen carefully what I’m going to tell in this article. These are important things and in the future, it’ll be helpful for you. Many properties based on it. Look at the picture given below-

When you sign up for a wallet it generates a pair of public key and private key. The Bitcoin address is the address of your wallet where you receive your funds or send to other wallets. Some people think that the bitcoin address and the public key is exactly the same thing. These two are not exactly same but they are inter-related.

In some wallets, provides a public key below the bitcoin address QR barcode. But, it is exactly not a public key, you should call it Hashed Public Key. This name will be better if we say technically. At the first time, when bitcoin was just started, all funds were received and sent only in public key.

Exactly what happens, suppose that your wallet is in the blockchain, all transactions of the wallet, how much you received and how much you sent will be calculated and according to it, the final balance is calculated. The wallet shows the final balance. Basically, the balance is in the blockchain, this is just a sum up. your wallet just showing it.

I recommend you to make a backup of your private key and store it somewhere safe and don’t share it with anyone. Because if you forget the password of your wallet, then you can regain your wallet using the private key. But some wallet doesn’t allow making the backup of private keys because they think if anybody makes a backup of the private key, he might lose it someday.

The backup method varies from wallet to wallet You can google corresponding to your wallet that how to make a backup of your private keys. I recommend you to use such type of wallets where importation and exportation of the private key are easy. This will be helpful for you, mainly when forks come. Nowadays the wallets making their security better day by day.

You might notice that some wallet companies making the bitcoin address variable. Variable means, each time when you accept bitcoins, the company provides new bitcoin addresses. In that case, the key combination changes after each and every transaction.


All these things depend upon the wallet you choose. I always try to gain max knowledge about the wallet system you are using. Some websites or wallets may simply give you a fixed address that you can use to receive and transfer funds. While some may change it with each transaction. While some may give an option to create a stable address for you along with having default variables addresses. It all depends on how that company is handling their clients. Many companies simply like you do use their platform for receiving and transferring funds without letting you to bother about your keys etc… Backup methods may also depend upon your wallet provider. It may not allow direct private key backup but indirect in a way so that you can regain it if you lost wallet without knowing actual private key. –   Hacks & Security

What is Bitcoin Forks? 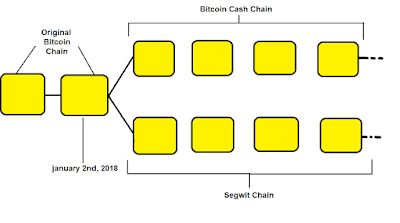 In the picture above, the blockchain broke into two parts. The blockchain was coming forward continuously but I’m just showing a half in the picture. On January 2nd, 2018, The blockchain broke into two different parts.  The upper part is Bitcoin Cash and the lower part is Bitcoin. The lower part is basically the segwit chain but the majority of supporters of this chain were more than the Bitcoin Cash, therefore it named Bitcoin. I myself believe that Bitcoin Cash is better than Bitcoin(Segwit Chain). There will probably not be any fork in the Bitcoin Cash. But the Bitcoin we are using, there will forks continuously come and in fact, started coming. The most important thing is, your forks use the same key combination. For example, suppose that I created a Gmail account([email protected]). I will use the same account for all Google products.  Basically, the same system exists in Bitcoin and Bitcoin forks. The same address exists in Bitcoin Cash, Bitcoin and Bitcoin forks and other forks. Basically, I meant to say that, the bitcoin forks use the same key combination( the public keys and private keys). So far, Bitcoin Cash has been the main fork of Bitcoin. This fork came on 1 August, Some companies on the same day declared that they started supporting bitcoin Cash. Some companies declared after one week, some companies still not accepting Bitcoin Cash. Suppose that I’m running a company, Bitcoin is an option, if we feel that it is good for integrating, we can handle it, then we’ll give the Bitcoin Cash. Basically, what happened there, the system was, if I had a bitcoin in my wallet address then I had to get a Bitcoin Cash. That means on 1 August, make the same amount of Bitcoin Cash how much a wallet have Bitcoins and give the Bitcoin Cash to the wallet. Now I am giving a realistic example, on 1 August, I had 1 wallet on blockchain.info. I had 0.2 Bitcoins and I was so worried because I didn’t get the Bitcoin Cash. I didn’t know that blockchain didn’t support Bitcoin Cash at that time. But I knew that I got the Bitcoin Cash in my private key but blockchain doesn’t showing because it doesn’t support it. So I exported my private key and imported to electrum application. Electrum was supporting Bitcoin Cash. In electrum, I got both 0.2 Bitcoins and Bitcoin Cash. But after 1 or 2 months blcokchain.info also started supporting Bitcoin Cash. In short, on 1 August, Bitcoin Cash was issued on every wallet address. These days, there are some wallets which still doesn’t support Bitcoin Cash. So, export your private key and import to the wallets where Bitcoin Cash supports. Some people know about the swipe system. They can use that. Swipe is basically a transaction system. The advantage of swipe is, the old keys gets destroyed and you’ll get a new pair of keys and it’ll use the same old property. But in export-import, the same keys will continue but the disadvantage is you must keep hidden your private key from others. Some people have the mentality that swipes is better but I think export-import is better, because, keep your keys with you. Have a good mining life.

How To Never Get Hacked Again?| Crackers know Better Than Others.