How to use Beef Framework in Kali Linux

Do you struggle to generate an Undetectable Payload?

Yeah. I know the feeling.

Well, when I was learning these things, I struggled every day to create an undetectable payload but I used to fail each time. At that time after some search, somehow I managed to bypass Antivirus protection.

But the Antiviruses were not so strong as they are now and that’s why bypassing those is not easy these days. But nothing can stop a hacker for a lifetime. Many developers are working around the world to make some advanced clever scripts to manage these things.

Here, in this tutorial, I am going to demonstrate the best script called TheFatRat, which we can use in this business. 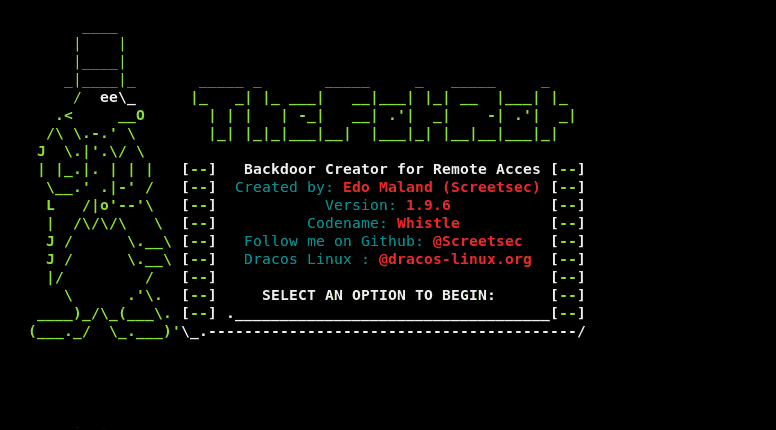 This tool compiles a malware with payloads and then the payloads can be executed in the platforms mentioned above. The special advantage of this tool is it can create powerful malware who has the ability to bypass most antivirus software protection.

You can generate backdoors, payloads for all these platforms in one tool. Isn’t it a good thing?

1. It can create backdoors for Windows, Mac, Linux, Android.
2. Bypass Antivirus Software Protection.
3. Multiple meterpreter listeners can be started using it.
4. It also can create an autorun script.
5. The generated backdoors can be bound with MS word, PDF, RAR file, etc.

Let’s go ahead and see how it can be configured in Kali Linux.

First of all, fire up your Kali Linux machine and open up the terminal. Download/clone TheFatRat from here.

Change the directory to Desktop or wherever you want. Here I am using the following commands to clone the tool.

This command will clone the tool on the Desktop. The file is a little big around 200 MB so it will take some time to finish the download. The download speed depends upon your internet speed. Now, change the directory to the TheFatRat folder. In my case, I am using the command-

In the next step, run the script by the command-

The script will start and it will check the required packages if they are installed or not. If not it will install them automatically. After completing the checking, a question will appear asking whether you want to create a path for FatRat or not.

Now your setup is completed successfully.

This command will start the tool. At starting the tool will check for the internet connection, the required packages are properly installed or not. After checking all, TheFatRat will launch the options menu to create backdoors.

Let’s go ahead and see how can we generate an undetectable payload using TheFatRat.

Well, now its time to generate a payload to execute on the victim’s system. Open a new terminal and start the FatRat tool by the command ‘fatrat’. After loading the FatRat, you will see many options to create different backdoors for different platforms. Here I am selecting the second option which is- 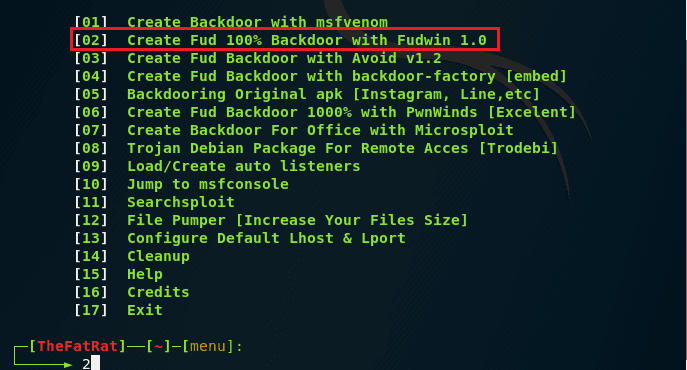 This option is to generate payload for a Windows machine. After selecting the option, new options will come up. Here I am using the latest version of Fatrat. I got here a new option called Powerstager 0.2.5.

I’ve tried the No.1 option but it failed to create a payload and showed an error while creating the payload. Maybe the tool is in developing mode right now. Don’t worry, try the first option after some months. Now proceed with the work with the No.2 option.

Old is Gold! I’ve selected the second option, which says Slow But powerful.

After entering the second option, the tool will show the local IPV4, IPV6 address, public IP address, and the hostname. 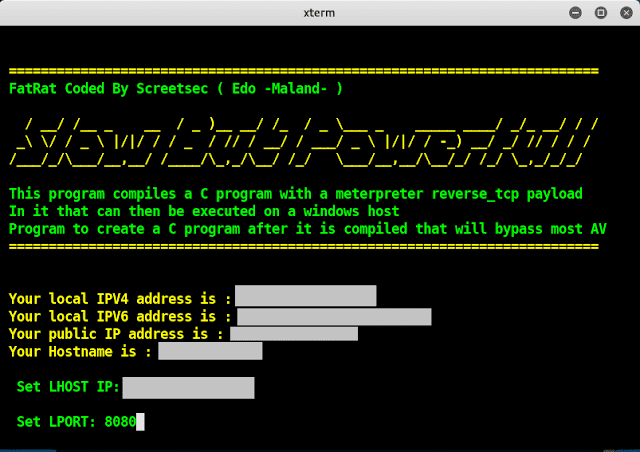 Here I will apply the payload on my other PC which is connected to my local network. So I am using local IP here. If you want it to work over the WAN then take your public IP address.
(N.B: If you want to take the public IP so that the payload can work over WAN, the IP must be static. If you have a dynamic public IP then you can deal with no-ip website. It will give you a hostname for free which you can use as a static IP instead of dynamic IP. Our tutorial on no-ip website is coming soon! Stay tuned till then.)

In this screen, the tool will ask you to choose your Windows architecture to generate the payload according to it. Here, my Windows is 64bit and that’s why I am selecting the 64bit FUD payload.

Now the tool will start generating the payload. It might show you several errors during the generating process but don’t worry. Stay with patience until it finishes the process.

Here I’ve generated the payload successfully which is saved to the output folder of TheFatrat.

I’ve uploaded the generated payload on VirusTotal. Only 3 Antivirus software detected it virus out of 69 but it is not recommended to upload it on VirusTotal. Do upload and scan it on NoDistribute to make sure you have created an undetectable payload.

Now send the payload to the victim and set a listener so that you can control the system.

Let’s go ahead and see how to set a listener.

Step 3: Set a listener against the payload(Meterpreter reverse TCP):

To know more commands, type ‘?‘ and hit enter. You will get all the commands you can use against the victim to control his system.

It is a good thing that we can create payloads for free of cost. We should thank the creator of the script. But the bad thing is, it is an open-source project and anybody can misuse it. Mainly the script bunnies.
Also, we can get some knowledge of payloads. How they work, how they can be created and we can protect us from payloads etc.
if you found the tutorial helpful then don’t forget to let us know and also if you are facing any problem regarding the installation or use of this tool, feel free to comment us below.

Do practice on your own property. Don’t apply it to properties that are not owned by you. If you want to, then take written permission from the owner of the property. We are not responsible for any kind of damage caused by you.